Want to Magnify the Impact of Your Networking Efforts? Consider Pacing Partners Mindset: The New Psychology of Success

It IS all about the small stuff

I hate that saying “don’t sweat the small stuff”.  I know it means not to get tangled up in your knickers as the British say, and therefore, we shouldn’t get worked up on being stuck in the subway for 15 minutes or being practically knocked over on the street by someone texting and walking. I can let those things go, but I will get tangled up if I miss the small moments of life ranging from watching the dancing Santa’s in the street or an exasperated look from my husband. It IS the small moments of vulnerability that are as important in making connections in life, at home, and at work. So, if you are longing for a warm holiday season with your family and more success at work, the tactics are actually aligned – learn to be more comfortable being strategically vulnerable.

allenge of being vulnerable during the holidays was so brilliantly illustrated in the Roundabout Theatre Company’s New York premiere of The Humans by Pulitzer Prize finalist Stephen Karam.  It is about a Pennsylvania family that breaks with tradition from eating at the parents’ house to celebrate Thanksgiving dinner at their daughter’s ramshackle pre-war duplex apartment in Chinatown.  The family has two daughters, both in their mid to late 20’s/early 30s who are struggling to find their place in the world.  The younger daughter lives in Chinatown and has just moved in with her boyfriend who is 10 years older and is supportive of her trying to find herself.  The older daughter is single and appears to be a very unhappy lawyer who suffers from a nervous stomach as she runs up and down the stairs to the only bathroom on the second floor.  As darkness falls,  a loud thunder-like boom without the thunder storm outside reverberates inside causing everyone to shudder, look out the window, and wonder if it is the apartment that is falling down or the world that is blowing up.  The hilarious dinner conversation alternates between the parents, who have hidden issues of their own, asking questions to the daughters seemingly  embarrassment or uncomfortableness with the attempt in explaining their life choices to them, to everyone wondering what is that repeated LOUD noise? 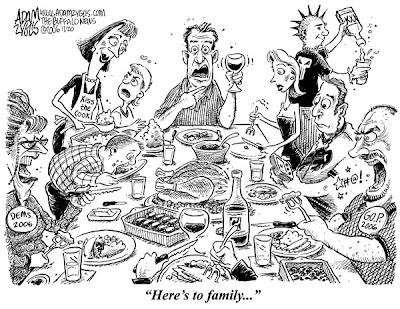 This reminds me of many of my Thanksgivings where my life was anything but perfect and I want desperately to connect with a family member; yet, I too felt embarrassed with my life choices and found it easier to talk about those many BIG distractions such as the weather or the latest AMTRAK derailment.  The challenge is that only when people feel safe are they going to make themselves vulnerable.  I was rewarded for the big things in life – winning tennis tournaments and accomplishing things, not for sharing my foibles and fears. I see this again and again in my work as an executive coach and in leadership seminars.

Recently, I was facilitating an executive presence seminar for women in which we videotape participants several times so they can see how they come across.  Consistently, the women rarely share anything that would make them appear weak or vulnerable.  The result is although they tend to come across as knowledgeable, competent, they do not seem very warm, human or approachable.  Hence, that tends to be the dichotomy women and many men face is how to be warm and competent? The solution is by learning to be strategically vulnerable, you can share small things about yourself that aren’t going to give away that your alcoholic mother never came to one baseball game or that you have struggled with performance anxiety your entire life. It means starting to share things such as you love going to science fiction movies or that you are unsure how to market or sell a new idea in your organization which could perhaps lead to a continued dialogue or connection where they could they provide guidance.  Research demonstrates that warmth and openness allows others to open up, increases productivity, makes people want to help you, and acts as a conduit for idea receptivity.  Yes, there is a percentage of the population that will take advantage of you or have a fixed mindset judging  people as strong or weak which is described in my book recommendation, Mindset.  That is why you need to be strategic and start small.  One of the women in the seminar shared that she was sitting next to a senior executive at a meeting who looked down at her feet and realized that she was wearing two slightly different black shoes as she got dressed in the dark.  They both quietly laughed realizing the small human moment created a new intimacy.

The only way to get beyond having meaningless small talk over the holidays or boring your colleagues at the annual holiday party by giving a flat elevator speech is to take a small risk and reveal something personal.  One of my most memorable holiday parties occurred when I shared that I had become a new step mother of a teenage son who was struggling in school and I had no idea of what to do.  I shared this with a senior executive who I knew had teenage children and he revealed that he too struggled with his teenage son and this conversation opened up an intimacy between us.  Don’t wait for someone to share first, prepare something to say about yourself…what will you say this year?