Presence: Bringing your boldest self to your biggest challenges Smart Apologies Should Be Strategic 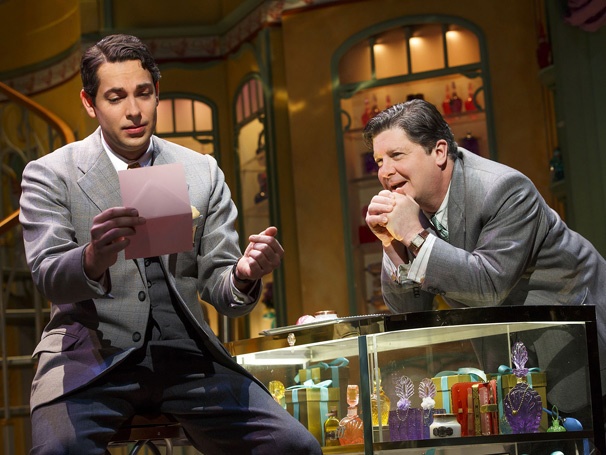 Mr. Malechek laid in his hospital bed with his arm in a cast and said, ” I am so embarrassed by my actions. I beg your forgiveness.  Will you please accept my apology and come back and take over the perfume shop?”  I felt Mr. Malechek’s pain as he waits for the acceptance of his apology.  Luckily, the young clerk in the Broadway show shown reading the letter, She Loves Me, is thrilled that he not only got his job back but a promotion to run the business!  The show is a delightful musical comedy about finding love at work.

Mr. Malechek runs a perfumery and finds out that his wife is having an affair with one of the clerks and thinks it must be this clerk, forcing him to resign only to learn it was someone else.  In addition, Mr. Malechek shoots himself attempting to end his life given the horror of losing his wife.  Fortunately, he just shoots himself in the arm.

While we were all laughing at the ridiculousness of the situation, most of us don’t experience such delight when giving or receiving an apology.  Having been involved as a giver and receiver of apologies recently, it made me think, what makes an apology an empowering one?

The three ingredients that stand out for me include:

The challenges for me are getting over the embarrassment for the giver and then overcoming the cynicism or lost of trust for the receiver.

Recently, I was made aware that I made a mistake on my monthly newsletter regarding details of a training program that I am promoting. My client sent me an email fixing the error and asked me to correct it immediately.  I felt mortification flush throughout my body.  How could this have happened?  I reached out to my marketing assistant, sent her the updated information and asked what can we do?  She said that unfortunately the newsletter was out so we can’t rescind it. We could revise it, send it out again, and also provide an update on social media.  I forwarded the options to my client and she was fine with the update as long as we changed it going forward.  She thanked me and said it wasn’t a huge deal.  I started breathing normally again as this client is very important to my business.  Although still embarrassed, my client’s non-threatening language helped me stay positive and focused on creative solutions versus feeling judged or attacked.  I realized that first response to an apology is critical in helping to resolve the situation in the most effective and efficient manner.

Little did I know that this situation would help me respond to the biggest apology of my life.

Given the recent passing of my mother, I invited my 86 year old father, Richard, to meet me in Philadelphia for a brief visit.  He is struggling from the loss of his wife of 56 years.  My father and I have never been close as he was a workaholic and shared with me that he chose work over being a parent.  Luckily for me, I have done extensive therapy and coaching and have moved beyond his neglectful parenting.  I have already shared with my father exactly how he negatively impacted my life over the past 25 years and we have agreed to a truce – I won’t swear at him and he will talk less about himself and listen more.  So, while I wasn’t exactly looking forward to seeing my father, at the same time, I have compassion for him.

We meet at an Italian restaurant CIBO with singing waiters.  We are enjoying the food and the brief operetas of our cheery waiter. We share stories about my late mother with me highlighting how she prevented me from marrying the wrong person as a young adult. And, I thank him for funding my tennis lessons and college.  After I finish expressing my gratitude, he shares that he obviously just helped me from a distance.  Then, as my father twirls his pasta, he starts to mumble in a sad voice that he is sorry he was not more supportive.  Flabbergasted, I turn to him and ask if he is actually making an apology.  He says yes. I take a deep breath. I calmly ask him to put down the fork, turn towards me, and give me the apology to my face rather than to the pasta.  He slowly puts down his fork and says, “I am giving you a heartfelt apology that I should have given years ago but could not. I wasn’t able to, wasn’t mature enough, or ready to.  I knew what was going on and should have tried to help but I didn’t do anything. I am terribly sorry.”

I was stunned. As tears flowed down my face, he asked me to please accept his apology, begging me like Mr. Malechek.  He struggled with taking responsibility for his behavior as he attempted to explain how he could have been so neglectful.   I listened patiently and reframed from judgment realizing how difficult it must be to offer an apology at 86 years old for something that happened 40 years ago.  I responded in a warm and calm voice, “I accept your apology.  It is a good first step.  It will take me some time to rebuild our relationship.  You will need to behave better for me to believe you are sincere.”  He understood and said he wants to have a connection with me and then proceeded to apologize in a genuine manner another six times during the next 24 hours.

A bad apology has the potential to further destroy or a relationship whereas in contrast a sincere and smart one can foster and/or strengthen a relationship, as discussed in Rosanna M. Fishe’s Harvard Business Review‘s article.  After returning home, I am still in shock.  While I may not be in a Broadway musical, apologies can create magic if you can be fully present to the moment.  Have apologies ever created some magic for you?

3 Responses to Apologies Can Create Magic