Flourish Knowing Your Value: Women, Money, and Getting What You’re Worth

Women, Money and Fun – can they go together? 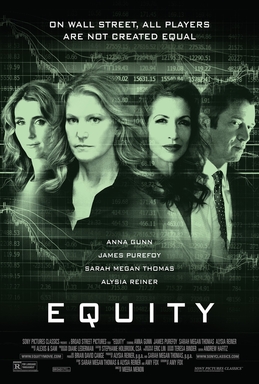 “Money…I like money. Isn’t it nice to be at a point in time in which women are able to say we like to work for money?” This is Naomi’s answer to the question about what she likes about investment banking while speaking at a college alumni event.  This is also the scene of how the movie, Equity, opens.

I am already intrigued and uncomfortable, as is the panel moderator and the audience, evidenced by a few nervous laughs. Given that I was raised by my mother, who was a social worker and advocate/board member for my mentally handicapped brother, along with my father, who was an academic neurologist, I was NOT raised to make money or even feel comfortable asking for or talking about it.

This movie is one of those rare films written, directed, and mostly funded by women about women investment bankers who work in that rarified man’s world of big deals and big money. First premiered in  the 2016 Sundance Film Festival, this small film is on a small budget; yet, it is making a HUGE impact.

Having worked in training and development within Human Resource departments at Goldman Sachs and Citigroup’s investment bank, I had experienced the best and worst of working with highly competitive women 15 plus years ago. I will never forget the time I was thrown under the bus by one nasty female investment banker we will call Helen, who literally put me down in front of my peers in a large meeting. I had just finished managing a successful conference for all women officers at the investment bank. Helen, a Managing Director and group head was also involved in planning the conference.  But, at this large meeting, senior leaders gave me a special thank you and Helen didn’t feel that she was getting the recognition she deserved, so she took it out on those less powerful – women like me who worked in Human Resources. Why? Because she could and I wasn’t the only one Helen targeted.  However, Helen was also known for hiring many women into her group and providing me with career guidance. Women like Helen were pioneers in investment banking who weren’t welcomed into the business, had to make a lot of sacrifices, and felt that they had to always be better than the men to succeed.  Therein lies the conundrum for women.  We have struggled to find our place in the world and now that we have arrived, we are acting like the worst male leaders by not being gracious and applauding other women’s successes.

The movie Equity focuses on Naomi, who is a Managing Director in a NY City based firm gunning for a promotion and more money.  There is a junior banker, Erin, who also wants a promotion and feels frustrated that she has been passed over and has just become pregnant.  There is Michael, Naomi’s boyfriend, who works in sales and trading and is constantly trying to obtain insider information from his girlfriend.  Michael also has many unsavory male friends who are involved in insider trading scandals.  Last, Samantha is the prosecutor, who is trying to indict investment bankers for insider trading.  Interestingly, Samantha comes to the alumni event to reconnect with Naomi to see if she can get some information to help her with her insider trading case.

Naomi’s last IPO was a flop and another male banker had to come in and save the day. She is haunted by her ONE past failure and takes up boxing in her small window of free time. Erin is struggling to figure out how to get promoted, and hiding her pregnancy from Naomi as she knows that might hold her back. In contrast, Michael and his band of merry men seem to be enjoying the game of business hanging out, drinking numerous cocktails, and giving each other stuffed animals – usually large furry rodents that sometimes have hidden clues.

This movie makes we wonder how much things have really improved since I left the business 15 years ago? What is the point of going for money if you are not enjoying the game? Women still seem to try to play a man’s game but not doing it well.  Women feel the need to have to prove themselves, never appear weak, and leave their warm vulnerable collaborative selves at home. Naomi is pushing hard to get a second IPO, does her due diligence and operates in an ethical manner to make sure this deal is successful. She rarely smiles, works round the clock, demanding that Erin deliver the analysis for the big meeting. However, when Erin shows her up and helps to win the IPO business, she doesn’t exactly take Erin out to celebrate. I keep asking myself why can’t Erin and Naomi support each other? Why can’t Naomi say I need your help to make sure this IPO is successful and if you deliver and I will do my best to get you promoted. Why can’t Erin tell her Naomi she is pregnant and that she still wants a promotion; instead, Naomi finds out by accident. Naomi seems threatened by Erin’s youth and ambition, whereas Erin feels afraid to share anything about her pregnancy. Don’t women realize they are playing the wrong game – one they can’t win?

Given that most of us spend more time at work than any other place, if we want to change this story of how women succeed in highly competitive/male dominated industries that Equity portrays, we need to find ways to calm our negative emotions and become more resilient, bring the warmth and relationship skills that most women reserve for their private life, learn to enjoy the game of work, and pay it forward as there is power in numbers.  What if women started helping each other more?

This is what I found was the distinguishing factor when I interviewed 40 women in the USA and Canada who succeeded in highly competitive/male dominated industries for my book Collaborative Competition- A Woman’s Guide to Succeeding by Competing.  The successful women were strategic collaborators – able to form relationships with a wide variety of people – and they were much happier than the women who took a perfectionist and heads down approach similar to Naomi’s approach.

I won’t tell you how the movie ends as I want you to go and see this enjoyable thriller! I can tell you it doesn’t end like I wish it would, with Naomi and Erin outsmarting the men, enjoying a cosmopolitan and laugh while riding in their private jet to an exclusive spa in Hawaii. Instead, I will share that Naomi was last seen talking to her what seems like her only friend – a pet fish. Let me know what you think of the movie.